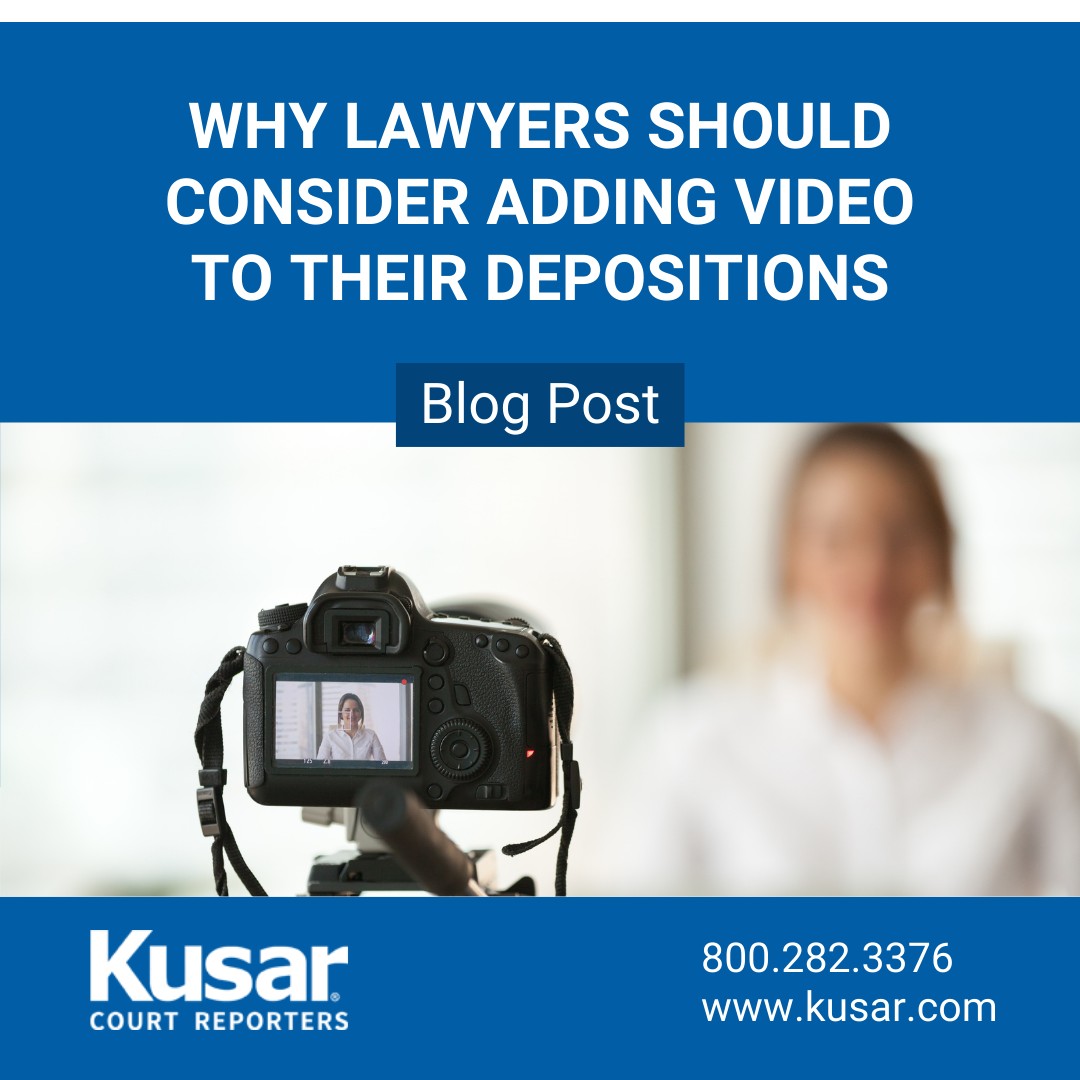 Why Lawyers Should Consider Adding Video To Their Depositions

Depositions have long been part of trials. Conventionally, depositions have been recorded in written transcript format and, when necessary, the transcript is read aloud during the trial. While this is one way of ensuring that a witness’s testimony is heard, it may not be the most effective. In fact, the most effective method may be video, which is why lawyers should consider adding video to their depositions. Whether you need a stenographer or legal videographer call Kusar Court Reporters at (800) 282-3376.

What Are Depositions and Why Are They Done?

Per the American Bar Association, a deposition is a witness’s sworn out-of-court testimony. A deposition can be used to gather information as part of the discovery process or to prepare a witness for trial. Additionally, a deposition may also be used at trial. Depositions also allow all parties to the trial to know in advance what a witness will say at trial so they can prepare for cross-examination, to call other witnesses to dispute the testimony, or to use other strategies.

Conventional Deposition Recordings and Their Flaws

Conventional deposition recordings are written transcripts or audio recordings. Both methods are useful and effective. A court reporter or stenographer transcribes the testimony in written format. He or she may do this live, as the testimony is being given, or after the deposition, using the audio recording. There are some challenges that can arise from these methods include the following:

Why Lawyers Should Add Video to Their Depositions

There are many reasons why lawyers should consider adding video to their depositions, including the following.

A written transcript is just the words that were spoken during the deposition. There is no tone, no body language, and no way to emphasize anything. Video adds context to those words by allowing jurors to see the witness’s body language and hear the tone of voice and whether the witness stumbled over words, hesitated, or otherwise indicated whether he or she was being truthful.

A witness may glare angrily when asked a question or may fidget nervously before answering. The witness may have spontaneous reactions that might be subdued in court. There may be pauses or other subtle signs of the witness’s emotional state that can only be noticed on video, not in the words of a transcript.

Video Can Substitute for a Witness Who Cannot Come to Court

If a witness lives far away, weather or personal responsibilities may interfere with his or her ability to appear at trial. The witness may be elderly or become ill and, therefore, be unable to appear in person. In some cases, the witness may pass away before trial. There are many other possible reasons to prevent a witness from appearing in court to testify. A video deposition can be used to substitute for a live testimony in these cases.

Video Is a Cost-Effective Way for Experts To Testify

Expert witnesses can be a critical piece of a trial strategy, but they can also be expensive. Experts often travel long distances and spend several days in a hotel for a trial. Recording a video deposition to be used for the trial can shorten the amount of time the witness is needed. In addition, lawyers can show the testimony more than once, without the expert’s physical presence. Recording a remote video deposition can save even more money by eliminating travel expenses.

As a written transcript is being read, lawyers are not allowed to add emphasis to words or phrases. This means reading in a monotone, which can be difficult to follow. In today’s world of visual media, having something for the jury to watch is a much more effective way of keeping their attention. Kusar Court Reporters provides high-definition recordings delivered in physical DVD or digital formats to meet your videography needs.

If someone described another person as using a “slashing motion,” one person may picture that slashing as going from left to right while another may see it as going from top to bottom. Still others may see it differently. If physical evidence is handled by the witness, allowing the jury to see it in a video will ensure that everyone sees the same behavior. They may still interpret it differently, but because they have seen it rather than heard a description of it, there is less room for confusion.

Video Helps Lawyers Determine Whether To Use a Particular Witness

Lawyers can watch their client or other witnesses in a video recording and determine whether to call the witness to the stand during the trial. A lawyer can also use the video to go over testimony while preparing for direct- or cross-examination of a witness.

Video Can Impeach a Witness if the Testimony Changes

A written transcript can also indicate that a witness changed his or her testimony, but it is much more powerful to play a video showing the witness’s original testimony. Many lawyers will add captions to allow the text to remain on the screen and pause the video on the words in question so that it can be clearly seen by the witness, the opposing counsel, the judge, and the jury.

The key to an effective and high-quality deposition is to use something better than a cell phone or web camera on a laptop. Hiring a videographer or a court reporting agency to record your video deposition ensures that your video will be clear, concise, and admissible in court.

Some additional tips for creating a quality video deposition include:

Are You Ready To Add Video to Your Depositions?

Back to Blog Page